The preclinical study compared IHL-216A to its component drugs, cannabidiol (‘CBD’) and isoflurane, in a rodent model of sports concussion that was developed in collaboration with the US National Football League (NFL) to accurately represent the type of brain injury that occurs in sports related concussion (1, 2). This study compared six groups of twenty-four Sprague Dawley rats and the treatment groups are listed in Table 1 on page 4.

When animals were tested in a Y-maze task, which assesses spatial memory by determining the animal’s ability to discriminate between a novel (new) and familiar arm, twenty-four hours after injury, animals treated with IHL-216A were found to have no difference in discrimination index compared to sham (uninjured) animals (mean difference= 0.0598, p=0.5855) (Figure 1).

In contrast, injured animals treated with either vehicle or isoflurane alone after injury, the discrimination index was significantly reduced compared to sham animals (mean diff=0.2704, p=0.0498 and mean diff=0.3095, p=0.0245 respectively). The group treated with CBD alone had intermediate performance in the Y-maze between sham and vehicle treated animals (mean diff.0.1745, p=0.2933). These findings indicate that the defect in spatial memory observed at 1 day post injury is restored in animals treated with IHL-216A.

The study was conducted at the Department of Neuroscience, Monash University. In this model, concussions experienced by NFL players have been scaled to Sprague Dawley rats, according to known biological relationships, to mimic the collision mechanics including high velocity impact and head acceleration. The injury is induced using a custom-built device, which provides one of the best-known simulations of sports concussion currently available in a rodent model. 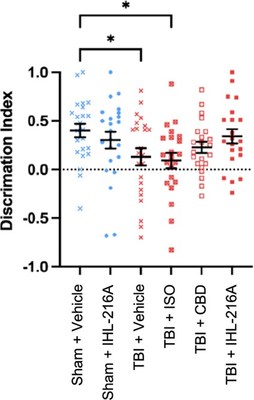 The findings from this study further support the protective effect of IHL-216A in traumatic brain injury and expands upon the initial animal study conducted by Incannex in 2020, the results of which were released on the 15th of December 2020 in the announcement titled, “Positive results from IHL-216A TBI/concussion study.”

Following current and previous positive preclinical observations, Incannex has commenced preparation of a pre-Investigational New Drug (IND) meeting package for IHL-216A. The study team is targeting a pre-IND meeting with the U.S. Food and Drug Administration (‘FDA’) in Q3 2022 to discuss the Company’s intention to conduct an expedited clinical trial program required for a new drug application and marketing approval.

Chief Scientific Officer of Incannex Healthcare, Dr. Mark Bleackley, said; “It is exciting that we have observed a neuroprotective effect for IHL-216A in an animal model that replicates injuries observed in sports concussion. Combining the results from our two animal studies indicates that IHL-216A has the potential to be effective at reducing the effects of traumatic brain injuries across the spectrum of injury severity. The data also gives us the confidence to proceed to clinical development, the first step of which is preparing for a pre-IND meeting with the FDA to get confirmation that our proposed clinical development strategy is acceptable.”

IHL-216A is a combination drug that combines cannabidiol (‘CBD’) with any volatile anaesthetic agent, including isoflurane. IHL-216A has been designed to be administered soon after head trauma to reduce secondary brain injuries that lead to neurological deficits. Due to the product’s potential therapeutic utility in contact sports, IHL-216A is designed to satisfy World Antidoping Authority (WADA) and Australian Anti-Doping Authority’s (ASADA) specifications for use by athletes at risk of TBI and Chronic Traumatic Encephalopathy, otherwise known as CTE.

About Traumatic Brain Injury and Concussion

Sixty-nine million people are estimated to incur a TBI every year (3). There are currently no registered pharmaceutical agents approved for the treatment of TBI. Current treatment strategies for TBI range for rest in minor TBI and concussion to surgical interventions to deal with hematomas in severe TBI (4).

This announcement has been approved by the Board.

About Incannex Healthcare Limited
Incannex is a clinical stage pharmaceutical development company that is developing unique medicinal cannabis pharmaceutical products and psychedelic medicine therapies for the treatment of generalised anxiety disorder (GAD), obstructive sleep apnoea (OSA), traumatic brain injury (TBI)/concussion, lung inflammation (ARDS, COPD, asthma, bronchitis), rheumatoid arthritis and inflammatory bowel disease. U.S. FDA approval and registration, subject to ongoing clinical success, is being pursued for each drug and therapy under development. Each indication represents major global markets and currently have no, or limited, existing registered pharmacotherapy (drug) treatments available to the public. IHL has a strong patent filing strategy in place as it develops its products and therapies in conjunction with its medical and scientific advisory board and partners.